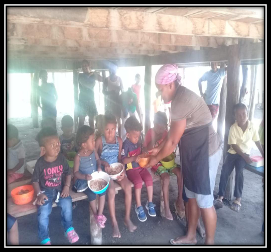 We have been talking “Manna” for several weeks now, and Jesus is at it again.  “I am the bread of life,” Jesus says.  Throughout John’s 6th chapter, Jesus has been talking about the manna that God provided for the hungry Israelites as they made their 40-year trek through the wilderness.  Jesus is now answering complaints that he has named himself as such, and so he seeks to offer some explanation as to who he is.  That manna, Jesus says, was given out of God’s love, but its impact was only for the present time because eventually, these people died.  The bread that Jesus provides in himself is something far deeper and, in fact, has eternal implications.

The passage from I Kings for this week is another Hebrew Scripture story involving food.  In this case, it is a dejected Elijah who is fleeing from Jezebel who wants to kill him. Elijah, in fact, asks God to take his life right then and there so that he would not have to face the threat and all of the stress that it was causing.  But after some sleep under the broom tree, Elijah awakens to find bread for his sustenance.

Perhaps it is easier to understand manna in the wilderness for the Hebrews or bread baked on hot stones for Elijah because in both those cases, it is physical bread that appears and is consumed.  But it is a bit harder to understand Jesus saying, “I am the bread of life.”  How does this bread satisfy our hunger?

In our reading from John’s Gospel, we continue to see just who Jesus is through the lens of God’s providing manna in the wilderness on their journey to the promised land.  While the crowd did not complain that they had received bread from Jesus in his feeding the 5,000, they do seem to take offense that Jesus has gone one step further and declared, “I am the bread that came down from heaven.”   They seem to be saying that it is OK for  Jesus to physically feed them but don’t spiritualize the event by claiming a direct connection with God.

That the people complained is also noted because this mimics what the Hebrew people did with Moses.  While Moses served as God’s emissary in delivering them from slavery in Egypt, it did not take them long to protest that at least when they were slaves; they could count on eating some food.  They wonder if God has brought them out to the wilderness to die, and they are not shy about letting Moses know what they are feeling.

Dr. Susan Hylen, in her commentary found on workingpreacher.com, points out that the Greek word “pisteuo,” which is translated as “believe” in John’s Gospel,  was more commonly used to define a trusting relationship.  The people in the wilderness lacked that basic trust, as were the people who complained to Jesus in John’s Gospel.

Is trust part of our issue as well?  It is hard to give of our resources of time, talent, and treasure when we feel uncertain about our own future.

What kind of manna is God offering you today?  Jesus is the Bread of Life, but perhaps it is not whole wheat, rye, or pumpernickel.  Perhaps it is the joy that we feel when we know we have followed the example of Jesus giving ourselves to a cause that is greater than ourselves.  Just as we have been fed with grace, mercy, and peace, how can we share that with the world?