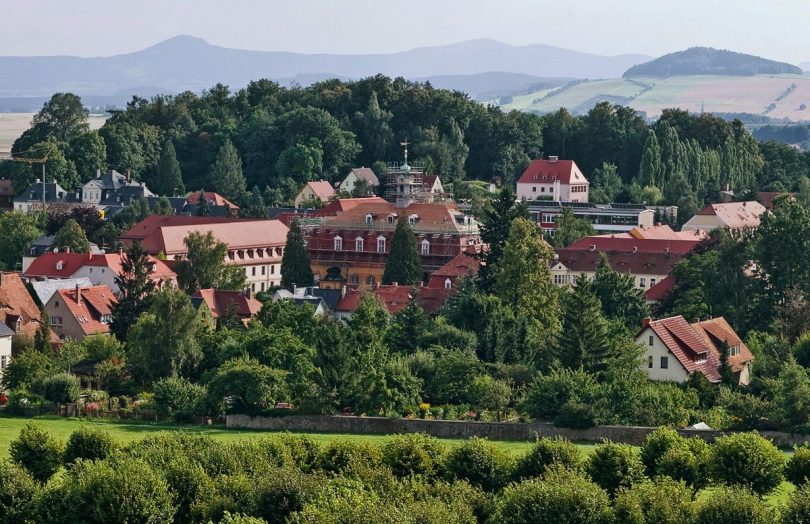 (The village of Herrnhut, Germany taken from the Huttberg)

What follows is less a sermon and more the sharing of a story I have heard and read about since I was a young boy. I hope and pray that it stirs in your soul as much as it does in mine.

This is a special weekend for those of us who are part of the worldwide Moravian Church. August 13, 1727. It is a day often seen as the re-birth of the Moravian Church when the Holy Spirit moved in such a way that those who worshiped together on that day were transformed, as was the future of the Moravian Church. But we often refer to this day as if it happened out of the blue and brought together fighting factions of the Herrnhut community in an instant. So it warrants us taking a deeper look.

First, a word about Nicholas Ludwig von Zinzendorf. Born in 1700, Zinzendorf was raised a faithful Lutheran in the pietistic tradition, which means that he took his relationship with his Lord to heart and allowed that relationship to influence his daily life. Frequent prayer, worship, and a constant desire to please God in all things would characterize his faith practice. He was also, by the way, a German nobleman, meaning that he was quite wealthy and owned a lot of land in the far southeastern corner of Germany within sight of both the Czech and Polish borders. So it was Zinzendorf who, upon meeting a Czech dissident, agreed to allow a group of refugees to live on his land in a village that came to be known as Herrnhut, which in German means under the Lord’s watch.

We need to remember that Herrnhut was a community of religious refugees. Many of these refugees had followed Christian David from Moravia, located in the Czech Republic. Still, not all of these refugees had come from the same place, so each came having experienced congregational life differently. And as this small town grew and its reputation as a dynamic Christian community spread, it became a place for many religious misfits to find a home. So, living here as we approach the beginning of 1727 are a wide diversity of people with widely divergent theological perspectives. As you might expect, these differences soon led to disagreement, discord, dissatisfaction, and eventually the desire of many to disassociate themselves from the community. Christian David, who built the first house in Herrnhut and had led many of these refugees to their new home, got so upset that he left and built himself a hut in the woods to escape it all. Hardly the community that the Moravian refugees had sought, and hardly the pietistic community that Zinzendorf had hoped to create.

Things were not good as there seemed to be divisions everywhere.

So bad were things that in the spring of 1727, Zinzendorf left his post with the German government in Dresden and moved to Herrnhut, deciding against moving back into his large manor house, or castle, in Berthlesdorf which was just under a mile away.   During that spring and summer, Zinzendorf did several remarkable things.

This from the Herrnhut Diary:

“August 13, 1727. The profound and highly uplifting Communion was held on August 13. Beforehand, as we were on our way to church, everyone was talking, and here and there, pairs were found among the Brethren, willing to unite. The church service started with the hymn: “Deliver Me, My God,” whereby a wicked person, watching the ceremony, was totally overcome. Afterward, Pastor Rothe, supported by the congregation, bestowed a true apostolic blessing upon the two confirmands. Then the congregation fell down before the Lord and started to cry and sing the hymn: “My Soul Before Thee Prostrate Lies.” One could hardly tell whether we were singing or crying, but it happened with such grace that the officiating minister (because Pastor Rothe celebrated Communion among the congregation) was also totally perplexed by it.   After the hymn was finished, some of the Brethren prayed with divine power, laying before the Lord the plight of the congregation and especially that they were at a loss at what to do with those who had left us, doubting they would succeed without sectarianism or separatism, since both are not the right way for the Lord’s house.

We also prayed childlike and modestly that He should teach us the true nature of His church and how to live and walk in His law; that we remain unsullied and inoffensive so that we don’t become solitary but fruitful, and neither violate the loyalty and obedience sworn to Him and His Word nor injure the common love through trivialities.

We prayed that He would fully bestow on us the holy order of His grace and not allow our souls to be led from the blood and cross theology, on which our sole salvation depends.

Afterward, as a great anointment flowed over us and we felt not far from Him, we prayed in faithful assurance that He should let our two Elders, Christian David and Melchior Nitschmann (who were in Sorau with good intentions), be powerfully drawn into our fellowship and experience what we were experiencing. Following the absolution, communion was held with humbled and strengthened hearts, and each of us went home feeling quite beside ourselves.

We spent this day and the following in calm and joyful composure and learned to love.”

So August 13 did not happen by chance; those Moravians became a new community by the power of the Holy Spirit because of prayer, Bible Study, worship, and self-examination.

The same is true today. It is only nostalgia if we gather on this day to reflect on an event that occurred 295 years ago and say to ourselves, “isn’t it wonderful what happened back then?” We must learn from that community and transform ourselves. So, what part of you needs to be made new? What part of your walk with Christ needs to be transformed? What relationships in your life need to be guided by the will of God? What part of you needs the prayer that Jesus prayed in the Upper Room that was read earlier? Here Jesus prayed for his Disciples just before his arrest and crucifixion. But here Jesus prayed for that Herrnhut community, and Jesus prays for us today:

I would invite you to transform your devotional life and strive to spend more time in conversation with God and with your brothers and sisters in Christ. Today let us renew our relationship with our Savior and rededicate ourselves to serving the communities in which we live; and joining our siblings in Christ around the world to share the good news of grace, hope, and love.