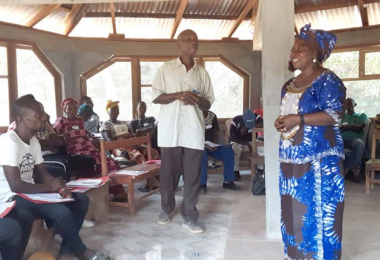 The Sierra Leone Mission Area emerged as the result of a vision that God gave to Mohamed and Safiatu Braima (originally from that country).  In the early 1980’s, the BWM had explored the possibility of ministry in Sierra Leone, but discovered that many other churches were already ministering and growing in the area.  In the 1990’s, after ten years of tragic war, that situation changed drastically.  Refugees returned to their homeland to discover that church buildings had been destroyed and mission agencies had been forced to leave.  The Braimas, who had been living in North Carolina for the past 30 years, had come to know Jesus Christ as their Savior and had joined the membership of Little Church on the Lane in Charlotte, knew that the time was right to love out the vision that God had given them for their country.

With support from Little Church on the Lane, a library, a mission house, a church building and, later, a high school were built in the town of Luawa Yiehun in the Ngehun district of eastern Sierra Leone.  In 2010, the Unity Board designated Sierra Leone as a Mission Area under the supervision of the Southern Province through the Board of World Mission.  A covenant was signed which brought together the  BWM, the Southern Province, Little Church on the Lane, the Braimas and the LYCC (Luawa Yiehun Community Church) in a ministry partnership.  Brother Mohamed Braima was ordained as a Deacon in the Moravian Church in February, 2012.

A scholarship program for the High School in Luawa-Yiehun has been started by Little Church on the Lane and, at present, commitments have been made for about 50 scholarships.  Containers with food and other supplies have been sent by Little Church on the Lane, Fairview and other groups, and discussions are taking place around the topic of establishing food programs that would not depend on outside sources and that might impact the local economy in a more positive way.

BWM Director Donna Hurt, who first visited the ministry in 2010, continues to be a strong advocate for the Sierra Leone Mission Area and has shared her story with many local congregations and groups in the Southern Province.

The work continues to grow and to spread into surrounding areas.

Moravians in Sierra Leone, a Mission Led by Mohamed and Safie Braima

Six mornings of every week in the village of Ngiehun, the day begins around 6:00 a.m. with members of the congregation gathering at the 3-room church. They’re there to hear the words of that day’s Daily Text with all the scripture, and then to pray together. Sundays are different, however, following a schedule much like what we experience in the States. First comes a time of fellowship at the church, occasionally with juice and bread. Sunday School begins with several praise songs (accompanied by drums and sometimes even a keyboard), followed by a class for approximately 50 children of all ages and another class for adults.  Whenever the Sunday School lessons end, “divine worship” begins with attendance typically more than 100, including many children. James Lasana, Mohamed’s cousin and quite capable lay pastor, usually teaches, often preaches, and assists in many other helpful ways.

A Moravian presence has spread beyond Ngiehun to several nearby villages. The Morfindor congregation began worshiping together in 2013. They are now overcrowded and planning to add a second room to their worship space. Three men serve as lay leaders for the new group in Mbaoma. They currently meet in a small house, but land has been cleared nearby to construct a church building. Mohamed oversees the ministry in these two additional places.

The Moravian Secondary School in Ngiehun, which educates about 200 students each year, is a source of pride for everyone in the village. Even the Muslim parents are grateful to be able to send their youth to this Christian school, which provides a quiet, daily witness. But true to the way Mohamed and Safie do everything, no religious beliefs are forced, only shared.

Even though there are no textbooks for the youth and old-fashioned chalkboards are being used in the classrooms, still the eleven teachers work hard to instill the government-mandated knowledge base. Repeatedly, the result is high test scores by the boys and girls graduating from the junior secondary level (7th – 9th grades) as they strive to move on to the senior secondary level (10th – 12th grades).

Lunch is offered twice a week, a process that begins with cooking at the mission house (outside over a fire of course, no electricity), followed by transporting the food to the school, then serving the rice/sauce/beans into large bowls to be shared by 4-5 students. Those teenagers are quite fortunate to have an occasional mid-day meal, a rarity in most other schools of Sierra Leone. Daily opening assemblies include a student-led song, the Lord’s prayer, and sometimes other scripture, plus announcements for that day. The exciting 2016 addition to the school is electricity, provided by the new solar power system, a luxury unknown to the rest of the village. New learning opportunities, even for adults, are becoming more possible because of this huge advancement.

The Braimas’ return to their native land has greatly impacted not only their own small Muslim village, but also many others in the Kailahun District of that West African country. As Christian role-models, they repeatedly exemplify the love of Jesus in the way they live and the way they give of themselves. Through relationships with the village chiefs, to relationships with the Imams at the local mosque, to relationships with the families of Ngiehun, these humble servants have made a difference that is appreciated everywhere. Their presence and vision has brought new hope to that remote little village of Sierra Leone, where Moravians now live. 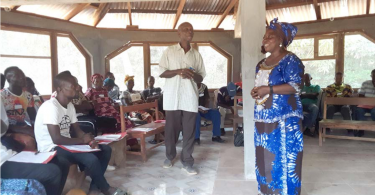 PSALM 30:11 SAYS, “You have turned my mourning into dancing; you have taken off my sackcloth and...