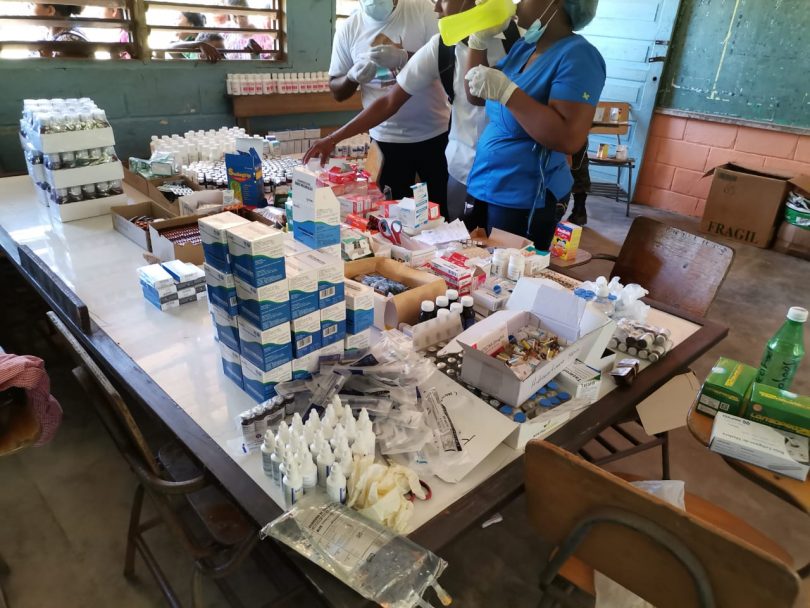 The $10,000 grant from Samaritan’s Purse was used to purchase medicines following the destruction caused by Hurricanes Eta and Iota in Central America in November of 2020.  More specifically, that grant assistance was used to purchase and deliver medicines to the more remote outlying villages of Honduras‘ easternmost political Department of Gracias A Dios where medicines are not available and medical professionals are not present.

The hurricanes dumped up to three feet of rain on this area popularly known as La Mosquitia. That rain caused floods that destroyed both houses and crops and filled hand-dug wells with unclean water.  The resultant food shortages, contaminated drinking water, and lack of adequate shelter caused an increase in the incidence of both water-borne illnesses and pediatric diseases. Even in the larger settlements where clinics exist and medicines are more readily available, medical facilities (like the Moravian hospital in Ahuas) registered increased patient loads.  In many of the more remote villages (accessible only by water or long trips over dirt roads) where medicines and medical professionals are not present, the effects of the storms and the flooding were even more pronounced. 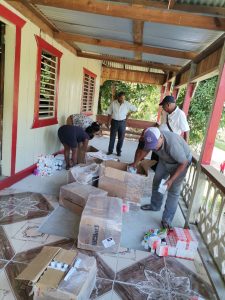 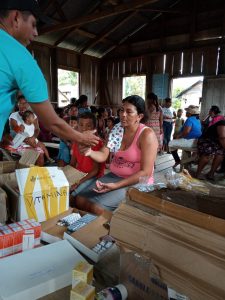 Medicines were purchased from established pharmacies by Moravian hospital staff familiar with medical needs in the area.  The transportation network that regularly moves medical supplies from the larger cities to the Moravian hospital was used to get the medicines to La Mosquitia where they were divided between the two Moravian provinces for subsequent distribution to the needy villages.

Distribution of the medicines was handled by the Moravian leaders, but nurses and doctors were recruited from both the Moravian hospital in Ahuas and from Government hospitals and health centers to oversee patient assessment and dispensing of medicines in the villages. 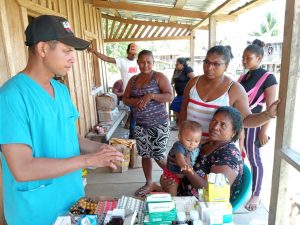 Marta lived in Auhya Pauni.  During both hurricanes, but particularly Iota, her village was flooded.  Following Iota, her house, along with those of at least 20 other families, was swept away by the rising levels of the Patuca River.  In addition to losing her home, the family’s food crops were destroyed at precisely the time that rice was about to be harvested.  The resulting homelessness, lack of food, and contaminated drinking water, caused sickness in both Marta’s family and in the village. Dysentery associated with water-borne parasites was a particular problem.

Marta’s husband, Harry, says that the devastation of Eta and Iota was unexpected.  Even now, six months after the hurricanes, the family is forced to live with other family members.  However, in November the situation was even worse. The family’s house was washed away, they were left without food and even clean drinking water was unavailable.  Potable water was especially a concern for the children of the extended family.  There were up to eight children in the home and all of them were exposed to illnesses in large part because of the lack of potable water.  Diarrhea, headaches, and fevers were common especially among the children.  Older members of the family experienced problems with high blood pressure and anxiety.

Harry says that because the family had lost everything and had no money, they were unable to pay for medicines or medical treatment.  He and his family were happy when the medicines purchased with the help from Samaritan’s Purse arrived in Waxma (the village where many of the displaced residents of Auhya Pauni have sought temporary refuge).  The medicines dispensed by the nurses sent through the Moravian Church helped his family to deal with the physical ailments caused by the hurricanes.

Rubio Ordoñez lives with his family in the Patuca River village of Wawina.  He says that during the month of November his family was living their normal life, happy, healthy and ready to harvest the rice that they had planted earlier in the year.  When Eta and Iota struck, however, everything changed.  Rubio says that his house and all that he owned was ruined.  His entire rice crop was lost.  His extended family saw their food and water ruined. Family members suffered from dysentery, fever, and vomiting.  Without money, food, or access to medical care, they had nowhere to turn and there was no one to help.  With the medicines sent by Samaritan’s Purse and the other relief aid, Rubio’s family was able to survive and get through the worst effects of the storm.  He expresses his gratitude for aid received which helped him and his extended family of six persons to get through the ill effects of the hurricanes.  Rubio has been able to return to his riverside agricultural plot where he has planted beans and other crops. 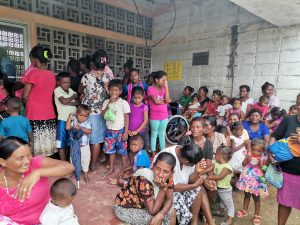 In dispensing medicines to hurricane victims, the love of Christ was shared with particularly needy people.  At several different distribution sites, residents told us that they had not received any assistance either when the Covid pandemic started or following the hurricanes.  They had felt forgotten and abandoned.  The medicines along with other aid provided during the visits prompted expressions of gratitude to both the team leaders and to God.  The visits made possible by Samaritan’s Purse were a source of renewed hope and faith.

At each location, pastors who led the outreach efforts prayed for the health and wellbeing of the people.  In several communities, worship services were held as part of the humanitarian relief effort.  In the village of Lisangni Pura, for example, while doctors and nurses attended to patients and dispatched the medicines purchased with the Samaritan’s Purse donations, pastors had the opportunity to evangelize.  Going from house to house, sharing the Good News, and praying with residents, several people either accepted Christ or rededicated their lives to the Lord.  These individuals along with other believers in the community committed themselves to building a church and parsonage so that a pastor could be sent to Lisangnipura. 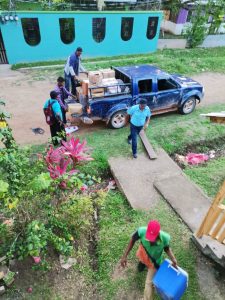 The grant of $10,000 from Samaritan’s Purse allowed the Moravian Church to visit communities and small villages that even during normal times are far removed from clinics, medical personnel, and medicines.  If medicines are available, they are sold in small stores alongside sugar, flour, lard, matches, and other staples.  A population that lives outside of the cash economy by growing its own crops (rice, beans, cassava, bananas, etc.), does not have the financial means to purchase even the limited medicines available at these small establishments.  Samaritan’s Purse made visits to these villages possible at a particularly vulnerable time during the pandemic and following the destruction of homes and crops by the twin hurricanes.