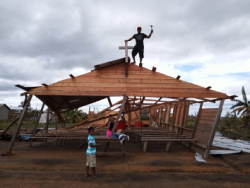 On Tuesday, November 3, 2020, Hurricane Eta made landfall near Puerto Cabezas, Nicaragua, as a category 4 storm with top winds at 140 mph. The storm moved slowly across Nicaragua and then into Honduras, continuing to drop heavy rain, causing streams and rivers to flood. In all, over 30 inches of rain fell along the track of the storm in two days.   Since leaving Honduras, the storm has also caused damage in Guatemala, Belice, the Cayman Islands, Cuba, and Florida. Remnants of the storm have now caused significant flooding in North Carolina. 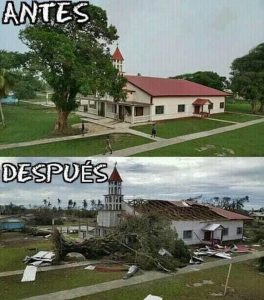 Most heavily damaged is the area around Puerto Cabezas at the point of landfall.  The village of Wawa Bar to the south was particularly hard hit.  Many villagers have now been moved to Puerto Cabezas and are being housed at the Moravian High School.  We understand that over 700 people are being sheltered there.  Many homes, schools, parsonages, and church buildings lost their roofs, while others were completely destroyed.

In La Mosquitia, Honduras, while the winds were not as destructive, the flooding has been.  All of the rain that fell inland is now making its way to the coastal low-lands where there are many Moravian congregations. While damage to the Moravian Clinic in Ahuas was not severe, of concern there is that Dr. Kenneth Serapio’s home in Puerto Cabezas received heavy damage, so he will be going home as soon as the roads are safe.

As bad as the damage to structures has been, the more critical loss has been to agricultural plots from which they feed their families but also receive a small income.  Another food source in these areas are the coconut, mango, and other fruit trees, many of which have been lost.  There has also been a significant loss of livestock.  These dynamics will limit access to food for months to come.

Many of these areas are still without electrical power, making recovery and communication difficult.  There is now concern about the spread of waterborne diseases from raw sewage being washed into rivers and wells in all of these areas. Complicating this even further is the fact that Covid-19 spread will become an issue as folks who have lost their homes crowd into shelters. 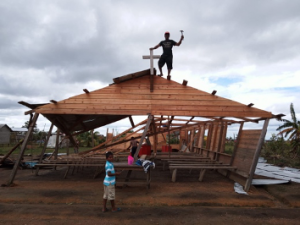 In addition to working with our Moravian Church leaders in Nicaragua and Honduras, we are exploring partnerships with organizations such as Mission Aviation Fellowship and Feed the Hungry who are well-established organizations in the area. Working with them will help us to reach people more effectively.

The immediate needs are for food, clean water, medicine, and sheltering materials for damaged homes.  The Board of World Mission needs your help to bring these needed resources to the people that need it right now.  We are preparing to release over $30,000 to Moravian Church leaders in Nicaragua and Honduras to help purchase all of these needed materials.

As of November 13, the National Hurrican Center has identified another tropical storm system in the Caribbean Sea which they give a 90% chance of developing into a named storm.  They have placed the coasts of Nicaragua and Honduras in the alert zone.

We humbly ask for your support of the Moravian Disaster Response fund, which allows the BWM to respond to disasters immediately with funds for emergency needs, as well as ongoing rebuilding projects.  US residents can send donations to The Board of World Mission, 1021 Center St.  Bethlehem, PA 18018.  Canadian residents can send gifts to The Moravian Church in Canada, 600 Acadia Drive SE, Calgary, AB T2J 0B8.

Or you may give online by clicking the “Give” button.